Hot Rods, Saxophones, and Cool Cats. WiFEE and the HUZz Band has it all.

WiFEE and the HUZz BAND is an all you can eat buffet. From their big band image to the tauntingly burlesque vocals, the entire outfit oozes musical prowess. With your first glimpse at their classy threads you know you’re about to see a show-stopping band. Take a load off, tip your hat to the barkeep, and take a listen. It’s not very often you come across big bands anymore. Most groups prefer to stay with the standard lineup – guitars, bass, drums, and vocals – but WiFEE and the HUZz Band are all about the big show. With their staggering 10-piece band, it’s all bright lights, flashy suits, and extravagant hairstyles as this group of incredibly talented artists fill the stage. If it’s hard facts you prefer when making decisions about music, then let’s talk awards. Just last year WiFEE and the HUZz Band won Best Band of 2015 from The Eclectic Ear. This year is just getting started and Stephen Cooper, the HUZz, took home Best Reed Player.

Recently on April 17th Stephen Cooper walked away with a WAMI for Best Reed Player. you have to give the guy his credit. He is one very cool Sax player. “Anytime you put that cat in the mix, you know he’ll lay down the heat,” we were told by one of their dedicated fans. The group didn’t grab the Best Horn Band award they were nominated for, but it’s all good. Stephen and the boys know how to rock n roll, so I wouldn’t be surprised see many more opportunities in the future. 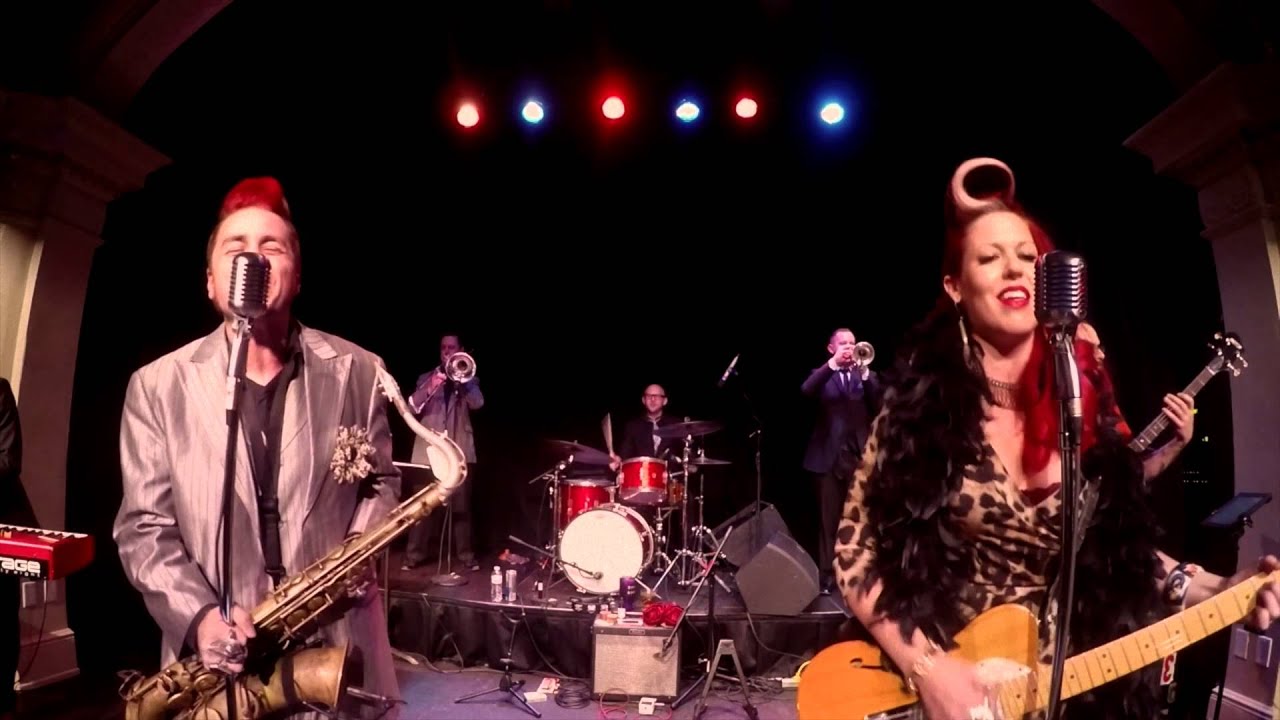 Stephen isn’t the only member of this band that knows his stuff though. Singer Ruby James is not just a pretty face. Her career, and struggles, as a solo artist have given her alluring skills to accompany the nine other members of WiFEE and the HUZzBAND. Ruby has had a long road to a successful career in music. Originally writing sad songs as a rocker. She almost packed it in for good when she lost her grandfather.”I didn’t want to write anymore,” she told On Milwaukee. It was a rough road, but when she landed at the Holiday Music Motel in Sturgeon Bay, a special motel dedicated to songwriting festivals, she was met with an alternative route. Stephen, struggling to keep things going himself, it was seemingly Fate that brought these two lost musicians together.

It’s a story of struggle, close calls, and of course, love. Just as the name suggests, WiFEE and the HUZz are married. They got engaged just weeks after they met at the Holiday Music Motel. It was the beginning of a collaboration in music that many fans were eagerly awaiting. Incorporating Adam Mackintosh, Greg Roteik, Barrett Taske, Chris Scheer, Mike Underwood, Tommy V, Kurt Shipe, Greg Garcia, Dan Zaffran, Melanie Jane, and Pat Macdonald they took their musical romance on the road. They’ve been captivating audiences, and filling the house ever since. You can check out their full schedule here at their website, or catch them on Face Book. If you haven’t heard of WiFEE and the HUZz BAND, then you’re in for a treat. We’ll see you at the show!